Coz asked if i’d re-post my tally hall entries from my blog onto HITS! i’m excited to share the good times with awesome-minded fellow tally hall fans. here it goes….

so. as most know, tally hall is one of my favorite bands. to understand more about tally hall and our history, check out my last review of their concerts. it’s long…i know…but highly entertaining. promise. this one will be long (and entertaining) too. i’ll do my best and add all the detail i can, because i know some of you wanted to go and weren’t able to make it, and some were really meant to be there (jeff & cheryl) but due to circumstances beyond their control, couldn’t. this one’s for you. i’ll even split it up into separate posts to break up the monotony of one gargantuan post. in reality, i wrote these december 21, 2009. yup, it’s taken this long to get the pictures uploaded.

like jeff, i’ll sum these next 5 posts up for those of you who just won’t read them. had lunch with tally hall, went to two tally hall concerts in the same day, one was for a bunch of elementary school kids, awesome pictures after the second. true story.

you might not go to all these links, but reading this would help understand how awesome it is that tally hall (on tour with rooney right now) performed twice in utah on friday, december 4th, 2009. that’s right…twice. and the first performance was at an elementary school. no, really. an. elementary. school.

if you don’t read that link (+20 ‘awesome’ points if you read both links…if you comment that you did, maybe i’ll draw you a picture!) the bottom line is that our friend cheryl is an elementary school teacher and made her room tally hall-themed this year. as jeff wrote a while ago,

“a week or so ago, the (world’s coolest) principal emailed them, saying that they hadn’t been able to raise the funds, but that if the band was coming by again next year, to let him know, and maybe the school would have gathered some more by then (so cool). the planning people wrote back, saying that the boys loved the idea so much that they were willing to do it for what the school had.”

and cheryl invited me to have lunch with the band before the performance. i cannot explain how excited i was. not even because they’re getting “famous” or whatever (that’s cool too) but because i’ve met them three times (again, the homework is in that first link!) i was just excited to hang out with them because they’re just such cool guys. honestly. that’s one of the reasons they’re my favorite band. they are so super chill and fun that i figure i’d probably hang out with them if we ended up in the same town or at the same university.

i got off work early and raced straight to the elementary school. upon asking directions of where i should go in the front office, i was asked if i was “with the band” by the secretary. she didn’t quite understand who i was or why i was there (apparently she didn’t read my blog post either) i looked around. “um…yes.” then i grinned, half guilty, to myself. “well, i’m friends with cheryl and with the band.” she told me i could just go on back then. i went past the cafeteria, where i saw a glimpse of the band warming up [pretty sure it made me randomly skip for a few steps] then i headed to cheryl’s classroom. i felt like a celebrity upon entering, because all the kids recognized me as i’m in most the band photos that cheryl has up on her wall. rad. the kids were all taking math tests, and listening to tally hall. i couldn’t have found a happier classroom test environment. 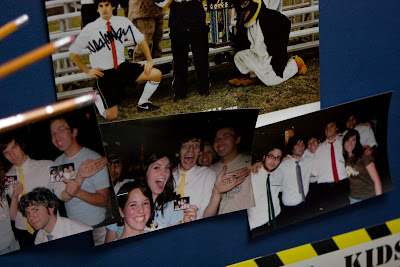 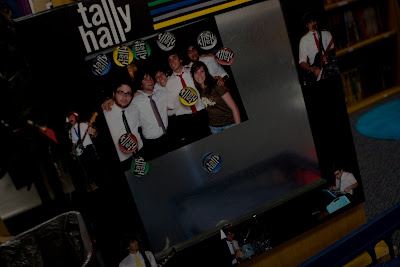 skip ahead. it was time for the lunch. the lunch consisted of costa vida (mmmm) and all the stuff shown below:

and the people included cheryl, her awesome boyfriend blake, the speech pathologist of the school (another fan), the principle, and me. oh, yeah, and the band. : ) (included in “the band”: rob cantor, andrew horowitz, zubin sedghi, ross federman and joe hawley, plus awesome michael schoonmaker who is their tour manager and mr. sound dude sam, who is awesome as well)

anyway, we were all just waiting expectantly for them, and finally they came! rob was first, and he introduced himself to me. as i shook his hand, i mumbled something like, “yeah…we’ve met before. three times. and took pictures.” i don’t know if he remembered me right away, but i think he might have after i said that. or later. or whatever. anyway, everyone introduced themselves. lunch was great. the seating around the nice faculty table went like this: blake, cheryl, mike, sound dude, amanda, me, rob, zubin, ross, world’s coolest principle, joe, and andrew. some highlights of the conversation— 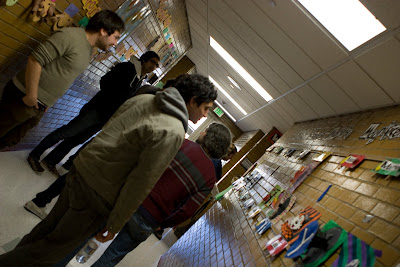 2 thoughts on “tally hall, there’s no one better than you. {part I}”